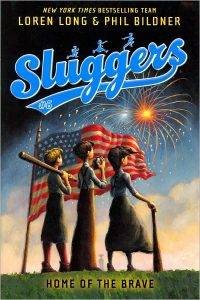 Sluggers Book #6: Home of the Brave

After the rousing success in New Orleans, the Paynes face yet another crushing defeat when the Chancellor’s thugs finally steal the baseball–and kill their uncle in the process. Faced with a second funeral in as many months, Griffith, Ruby, and Graham are determined to beat the Chancellor at his own game and save their family as well as the game of baseball. Pulling into their hometown of Baltimore, the Paynes are reunited with a familiar face, and the Travelin’ Nine are tested on the field once again. Can they win without the help of their baseball? Prepare for fireworks in this final inning to the grand slam series, “Sluggers.