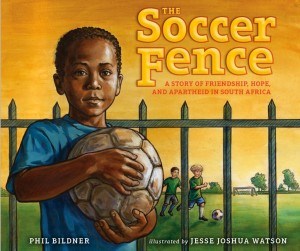 As a boy, Hector loved playing soccer in his small Johannesburg township. He dreamed of playing on a real pitch with the boys from another part of the city, but apartheid made that impossible. Then, in 1990, Nelson Mandela was released from prison, and apartheid began to crumble. And when the beloved Bafana Bafana national soccer team won the African Cup of Nations, Hector realized that dreams once impossible could now come true.   Download Common Core State Standards Teacher’s Guide

Bulletin of the Center for Children’s Books

Living at the height of apartheid in South Africa, a young black boy, Hector, tries to get in on the soccer games that a group of white boys plays in a nearby park, but he’s rebuffed for his race, even as watershed events like Nelson Mandela’s release from prison and the first open election in 1994 occur around him. As the African Cup of Nations galvanizes the country to support the racially integrated football team, Hector and one of the white boys get caught up in the sporting frenzy, becoming friends and playing together at the Cup’s conclusion. Though the book initially focuses on the emotions of the excluded boy, it expands into an effective and informative historical work as it documents the progression of the matches in the Cup, the Cup’s key players, and the social context. Watson’s boldly outlined acrylics are striking and warm in their depiction of the story, dramatically setting its characters against backdrops that wash a single color, such as sunset orange or rich ochre, over pencil details that often convey historical information through newspaper clippings and depictions of political events. This is, then, a remarkably effective tale of sportsmanship and overcoming prejudice in an accessible and high-interest format. The book includes an extensive author’s note, a bibliography of sources, and a historical timeline of South African history. TA

Hector tells of apartheid’s gradual breakdown, which happened while he was growing up in South Africa. As a young black boy, he watches white boys playing soccer, but they ignore his request to join their game. Years pass and changes come. After the first open election, Nelson Mandela becomes president. Later, South Africa hosts a soccer tournament and wins with an integrated team. And, at long last, a white boy invites Hector to play soccer with him. Bildner overcomes some of the problems inherent in a picture book with a time frame extending over several years. Roughly four years old in the opening scenes, Hector is in his early teens by the end, but the illustrations convincingly portray the boys as they grow up, while the narrative thread connecting the story’s events is strong. Combining pencil drawings and acrylics, the illustrations are colorful and expressive. An appended apartheid time line, aimed at a much older audience, briefly discusses significant events. This unusual picture book shows social change as it affects one boy.

A tale of sports bridging cultural and racial chasms. This story begins during apartheid with a young South African boy who accompanies his mother from their shanty in a Johannesburg township to her job in the home of a wealthy white family. Adept at soccer, the boy longs to play on the fenced green lawn with the white boys, but he can only watch from outside the fence until one day, he gets to bicycle kick the ball back over the fence. The stark color contrasts throughout the book alternate between the rich greens and blues of the white boys’ lush lawn and purple and orange scenes, in which democracy begins and Mandela is released from prison and then becomes president. When the boys and the country unite to cheer on their mixed-race soccer team, Bafana Bafana (meaning “The Boys, The Boys”), and celebrate their victory over Tunisia in the African Cup of Nations, Watson creates a jubilant scene awash in yellow. The wordless final page hints at a brighter future for a South Africa positively influenced by the people’s passion for sports. Bildner and Watson offer young readers an informative snapshot of a divided land through the lens of boys who just want to play. (Picture book. 5-9)

This gentle yet penetrating story underscores the power of sports to unite, while providing an overview of the seismic changes the 1990s brought to South Africa. Bildner (The Unforgettable Season) uses soccer as a metaphor for apartheid; the narrator is a black boy who kicks around an “egg-shaped” ball with his sister and friends in his ramshackle Johannesburg township. During trips to a wealthier neighborhood, the boy sees a white boy playing soccer with his friends in a lush park; though he is eager to join the game, the other players ignore him. Bildner moves quickly through recent South African history, touching on Nelson Mandela’s release from prison, the end of apartheid, Mandela’s election as president, and the country’s 1996 victory in the African Cup of Nations, which brings the two boys together. Watson (Hope for Haiti) sets the scenes with gestural pencil drawings, while painting the main characters and the soccer action in rich, vivid acrylics. Concise historical notes follow the story, giving readers helpful context. Ages 6–8. Author’s agent: Erin Murphy, Erin Murphy Literary Agency. Illustrator’s agent: Rubin Pfeffer, East West Literary Agency. (Mar.)