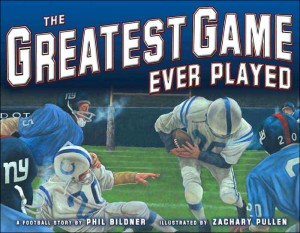 The Greatest Game Ever Played

The 1958 NFL championship game is known to football fans as the “Greatest Game Ever Played.” Featuring gridiron legends like Johnny Unitas, Frank Gifford, and Vince Lombardi, the Game marked the beginning of America’s infatuation with professional football. Now, Phil Bildner tells a heartwarming father-and-son story against the backdrop of this historic moment.When the New York Giants baseball team moves to San Francisco, young Sam discovers the other New York Giants—the football Giants. He convinces his skeptical Pop to come with him to the Game, and as Johnny Unitas engineers Baltimore’s legendary comeback, Sam and Pop rediscover the joy of rooting on their heroes together.

Grade 1-5–This picture book recounts the exciting 1958 NFL championship game as viewed by a young fan and his father. It’s been a tough year. Their beloved New York Giants baseball team moved to San Francisco. Pop lost his job; though he’s found another, he’s working long hours, and Sam misses the time they used to spend together. Even Sam has lost his job selling newspapers, but, as a parting bonus, his boss gives him tickets to the big game between the New York Giants and the Baltimore Colts. Pop declares that he’s not interested in football, but as they watch the action on the field, the two are drawn into the thrilling contest. Even as they root for the home team, they can’t help admiring the gritty courage of the rival quarterback, Johnny Unitas, who leads the Colts’ come-from-behind victory. Pullen’s oil paintings capture the tumultuous action and the fans’ enthusiastic response. The comically exaggerated facial expressions balance the story’s nostalgic mood. An author’s note adds facts and helps sort out the game’s significance. This is an engaging tale, well told, and a warm portrayal of the bond between sports-loving fathers and sons.

The New York Giants are Sam and his father’s favorite baseball team until they move west. Sam misses the team, but most of all he misses spending time with Pop, who has forsaken sports–despite Sam’s breathless discovery of a football team with the same name. When Sam is given tickets to the 1958 NFL championship game, he and Pop go together, and Pop gets enthused despite the Giants’ loss. Bildner’s dynamic writing captures all the excitement of a game watched on TV by 40 million people and played by greats such as Johnny Unitas, Frank Gifford, and Pat Summerall. Moreover, the father-son relationship, often bound together by sports, is realistically portrayed. However, would true fans of the Giants consider the game the greatest ever played given the Colts’ win? Pullen’s pictures portray many of the fans and players as caricatures, but Sam’s dad is so goofy looking, he’s distracting. However, the energy of the paintings perfectly matches Bildner’s lively text, which brings to light some great football history to share across generations.