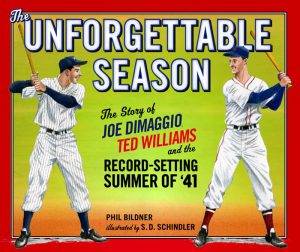 At the start of the 1941 baseball season, neither Joe DiMaggio of the New York Yankees nor Ted Williams of the Boston Red Sox were beloved by baseball fans. But that all changed when Joe started a 56-game hitting streak and Ted’s batting average rose to over .400. Despite numerous challenges along the way-Joe had his bat stolen by an overeager fan and Ted’s batting average dipped to .3995 on the last day of the season-the records set by “Joltin’ Joe” and “The Splendid Splinter” have yet to be broken. New York Times bestselling author of the Sluggers series (with Loren Long), Phil Bildner has written an accessible tribute to two of baseball’s greatest heroes. Packed with fun facts and statistics for eager fans to pore over, this book is sure to be a home run!

One of the joys of baseball is its intergenerational appeal. Parents and grandparents pass on tales of special games and players, and today’s young fans will do the same; thus, the heroes of the past and their exploits live on. The 1941 season was especially memorable because of the amazing accomplishments of two of the greatest players of all time. That was the year the Yankees’ Joe DiMaggio hit in 56 straight games and Boston’s Ted Williams had a season batting average of .406. Alternating between the two stories, Bildner narrates the tale with breathless enthusiasm, capturing the excitement that swept the nation, while cleverly incorporating facts, statistics, highlights of the games and insights into the players’ personalities. Modern fans are reminded of more recent players who attempted to break these records and of other records already shattered (Barry Bonds is conspicuously absent from the discussion of the lifetime homerun record). Schindler’s soft, detailed ink, watercolor and gouache illustrations perfectly complement the text as they capture the mood and time period along with the action. Will there ever be such a season again? Wait ’til next year. Batter up! (Picture book. 6-12)

In a narrative that’s conversational yet informative, Bildner dives into the baseball season of 1941, alternately focusing on Yankee slugger DiMaggio, who had a 56-game hitting streak, and Red Sox star Williams, who ended the season with a batting average of .406. Bildner builds suspense with taut descriptions of critical on-field moments (“…on that warm spring afternoon in the Bronx, the Streak began”), while Schindler’s paintings capture the ballpark energy, with authentic period details and solid likenesses of DiMaggio, Williams, and other players. Bildner and Schindler effectively evoke the baseball fever ignited by these two performances, which established records that have yet to be broken–a fact that makes this story all the more satisfying. Ages 7–9. (Mar.)

This warm tribute recounts the achievements of baseball greats DiMaggio and Williams in the 1941 season. Bildner emphasizes their sportsmanship and hails their work ethic and grace under pressure. DiMaggio’s 56-game hitting streak inspired songs and was followed by fans everywhere; when it came to an end, the Yankee Clipper noted that he was not happy, but relieved. And Williams chose to play on the final day of the season, even though it jeopardized his chance to keep his average above the .400 mark. Fans will relish the number of facts sprinkled throughout. Joe’s younger brother, Dominic, makes an appearance: a baseball great in his own right, he was a Red Sox teammate and friend of Williams. Schindler’s pen, ink, and gouache illustrations ably complement the text, and the book sports a handsome, retro look with lots of white space around the text and oversize illustrations. In an author’s note, Bildner describes records set by Babe Ruth, Lou Gehrig, and Hank Aaron, and observes: “you never know when a player just might start a quest to bat .400 or begin a record-breaking hitting streak.” This winning picture book should be welcomed by baseball enthusiasts everywhere. Even non-sports fans will appreciate how Bildner and Schindler weave period details into this engaging account of one remarkable season.