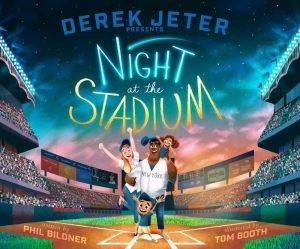 Night at the Stadium

A baseball stadium comes to life in this magical picture book brought to you by legendary sports icon and role model Derek Jeter.

Seven-year-old Gideon is overjoyed to be at Yankee Stadium watching his favorite team win! And when the game is over, he’s going to get an autograph from his favorite player, Derek Jeter. However, Gideon gets separated from his family and then he tumbles into a secret part of the stadium. There he discovers a magical world where everything from the rakes and the hoses to the bats and balls to the food to the monuments in Monument Park has a story to tell. But can Gideon finally find his family and get the autograph he really wants?

Attending a baseball game is a great way for families to spend time together, and in this work, a happy family (which just happens to have the exact composition of Derek Jeter’s own family) is ready to celebrate a Yankees win by collecting some autographs. Unfortunately, young Gideon quickly loses his family when he is jostled by the crowd as he attempts to find his autograph book. Before he knows it, Gideon has entered a special realm deep inside Yankee Stadium, where animated bats, balls, equipment, and stadium food stuffs bicker while trying to help Gideon find his family. Finally, the ghost of Babe Ruth in Monument Park guides Gideon to the most special surprise of the night—Derek Jeter himself! The Captain has found Gideon’s autograph book, but before he returns it, he adds his signature to the cover. The bright, stylized illustrations mark the picture book debut of illustrator Booth, and his most effective illustrations are those that show the stadium as twilight is falling and the family is enjoying the game. Jeter is realistically rendered and depicted as the model professional athlete—one who makes dreams come true by sharing his signature. VERDICT A charming story for young baseball fans, their parents, and those who feel the magic when they step inside a baseball stadium.–Sally James, South Hillsborough Elementary School, Hillsborough, CA

A young New York Yankees fan gets some unexpected help in his quest for an autograph from his favorite (ex) player. Separated from his biracial (black/white) family in the hubbub following “the awesomest game ever!” Gideon finds himself deep in the bowels of Yankee Stadium—where, to his amazement, bats, balls, bases, rakes, buckets, and food items from cotton candy to sushi (“Sushi? At a baseball game?” “We always get a raw deal,” the smiling maki rolls explain) have all come to boisterous, chattery life. Ultimately Gideon finds his lost autograph book in the stadium’s Monument Park—in the hands of his (likewise biracial) hero Derek Jeter, who signs the cover and vanishes just as Gideon’s misplaced parents catch up. Bildner supplies an appropriately frisky narrative: ” ‘Of course we talk!’ the balls said bouncily. ‘We all talk!’ the bats added woodenly.” Booth lends the stadium’s shadowy back halls a convincing sense of dissociation from reality by cutting them into M.C. Escher-style zigzags. Otherwise he goes for a less subtle look in the illustrations by putting faces and, often, stick limbs on the baseball gear, giving Gideon histrionically excited postures and expressions throughout, and rendering Jeter (and Babe Ruth, who rears up from his plaque for a cameo) with numinous presence. A direct riff on Night at the Museum. Also, by now younger readers will barely remember Jeter as a player, so the lionization may need some explanation. (Picture book. 6-8)