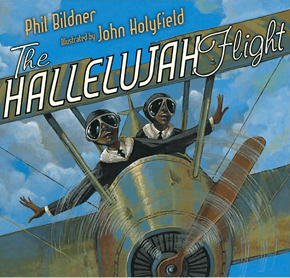 In 1932, James Banning had a dream: To fly across the country and inspire people brought low by the Great Depression. But for an African- American pilot — even an ace like James Banning — this was no easy feat. With a little ingenuity and a whole lot of heart, he fixed up the dilapidated OXX6 Eagle Rock plane with his co-pilot and mechanic, Thomas Allen, earning them the derisive nickname, “The Flying Hobos.” But with the help of friends and family along the way who signed their names on the wings of the plane in exchange for food, fuel and supplies, Banning and Allen made it through treacherous weather and overcame ruthless prejudice to receive a heroes’ welcome upon landing in New York on October 9, 1932. This exceptional story of determination and pride, shown through John Holyfield’s energetic flight scenes and sweeping landscapes, will put you in the cockpit right alongside Banning and Allen as they complete the journey of a lifetime.

This high-spirited collaboration re-creates the historic flight of James Banning, the first African-American pilot to fly across the continental United States. Bildner (co-creator of the Sluggers series) chronicles this feat in the voice of Thomas Allen, Banning’s mechanic and copilot on the 1932 flight from Los Angeles to New York City. Propelled by breezy dialogue, including repeated cries of “Hallelujah!”, the story opens as Banning announces how they’ll fund the trip: those who donate food, fuel, and supplies along the way can write their names on the wings of the open-cockpit plane (“They’ll fly into the history books right along with us!”). Dubbed the Flying Hoboes by skeptical colleagues, the duo completes their mission despite such hurdles as a leaky engine pump, a fierce storm, and racial prejudice. Rendered in acrylic paint, Holyfield’s (Bessie Smith and the Night Riders) stylized paintings help this saga get off the ground effortlessly (night scenes, often lit in blue, take on the feel of movie posters). Especially uplifting is the image of the copilots saluting the sunlit Statue of Liberty from their plane, its wings crowded with signatures. Ages 5–8.

As Phil Bildner says in his author’s note “who knew” about James Banning and Thomas Allen and their incredible flight from coast to coast in a dilapidated plane. They did not have much money, but came up with a plan to get people to help them and then allowing them to sign their names on the planes wings. In September of 1932, they set out from Los Angeles and what a trip it tuned out to be. They braved burning heat, landing in the dark with no lights anywhere, prejudice at places where African Americans could not be served, and terrific storms. In other places they were greeted as heroes, fed and feted and after nineteen days of flying, they flew over New York Harbor and saluted the Statue of Liberty. The called themselves the “Flying Hoboes” and they named their adventure “The Hallelujah Flight.” This is a book that sheds some light on a little known accomplishment in early aviation history. The story is beautifully told and the illustrations are a delight and add to the story through humor and wonderful expressions on the faces of Banning and Allen. The end papers show the route and stops for this amazing adventure.

K-Gr 3—An engaging account based on true events. James Banning and his copilot, Thomas Allen, the “Flying Hoboes” as the story has it, became the first African-American men to fly across the country. Traveling 3300 miles in 21 days, they flew from Los Angeles to Long Island, NY, in their old, rickety OXX6 Eagle Rock plane on October 9, 1932. Landing, they were met with a hero’s welcome. The story is filled with the difficulties faced by the two men throughout their journey. Two black men trying to accomplish what few other people could even hope to do during the Depression was daunting. And they faced incidents of racism along the way. But, by and large, they were met with more help and encouragement than disdain. The story is exciting and fast paced, and the writing is upbeat and inviting. Large, colorful illustrations were painted in acrylics on canvas and truly enhance the text. Unfortunately, there is very little factual information about Banning or Allen. Great as a read-alone as well as for telling aloud, this story serves to rescue two worthy men from historical obscurity. Students would benefit from knowing about them and their “Hallelujah Flight.”

Pioneering aviator James Banning dreamed of becoming the first African-American to fly across the country, though his biplane was old and worn. Co-pilot Thomas Allen relates how that dream came true in 1932 thanks to the help of people across the country, who contributed encouragement and practical support and wrote their names on the airplane’s wings to be part of the adventure. Based on both fictional and nonfiction sources, the story is briskly told in Allen’s voice, with plenty of imagined dialogue. Holyfield’s gorgeous oil paintings are done on textured backgrounds in a palette of blues and browns. Occasional double-page spreads emphasize the breadth of Banning’s vision, while the majority of scenes show events along the way: their tiny biplane above the Grand Canyon; angry white townspeople refusing to serve them food; a ferocious storm in Pennsylvania. Naysayers called them the “Flying Hoboes” but they called it “The Hallelujah Flight.” Hallelujah, indeed, to Bildner for finding and telling this story. Pair with Amelia and Eleanor Go for a Ride, by Pam Munoz Ryan and illustrated by Brian Selznick (1999), to illustrate the excitement of early flight. (Picture book. 5-8)