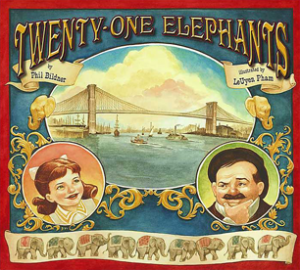 Step right up, ladies and gents. Believe the unbelievable and dream the impossible because Hannah, the little girl with big dreams, is coming your way.

Come and see for yourself her bold acts of bravery, her courageous conviction as she proves to the world that the Brooklyn Bridge is safe to cross.

But she can’t do it alone.

P. T. Barnum and his parade of twenty-one elephants provide a spectacular show that will save the day!

Then you’ll have to look inside.

You won’t want to miss this, the greatest show on earth.

Bildner’s (Shoeless Joe and Black Betsy) appealing tale celebrates the building of the Brooklyn Bridge, as well as the perseverance of a girl determined to walk across it. During the first years of her life, Hannah watches, fascinated, as workers begin to construct the world’s first steel suspension bridge. “She dreamed of the day when she would finally be able to walk across it and out into the big city.” Yet Hannah’s father insists that this “metal monster” cannot possibly be safe-even after the bridge’s chief engineer, Emily Roebling, rides across it in a horse-drawn carriage. Pham’s (Piggies in a Polka) detailed, realistic watercolors chart the architectural wonder’s slow rise outside the girl’s window, while the full-bleed three-quarter spreads depict 19th-century Brooklyn’s buildings and streets. Hannah’s other family members, teachers and townsfolk echo her father’s skepticism and voice suspicion that the bridge “is certain to collapse,” even as the heroine futilely recites facts about the bridge’s strength and size. She finally has a brainstorm while watching elephants perform at the circus and asks P.T. Barnum if she can borrow his animals. “Great minds think alike, little lady,” replies the showman, and a wordless spread depicts Barnum’s 21 elephants triumphantly parading across the Brooklyn Bridge-a feat that finally convinces Hannah’s father that “the bridge was indeed safe and strong.” Bildner and Pham deftly juggle fact and fiction in this charming tale, which celebrates a child’s imagination and faith. Ages 4-8.

In 1883, the Brooklyn Bridge was opened to the public thereby connecting Brooklyn to Manhattan Island. Little Hannah has been mesmerized by its construction as she watched it grow up out of the water from her Brooklyn home. When it is completed, she cannot wait to walk across the magnificent bridge. Her father, like many people at the time, is not convinced that the bridge will not fall down. After all, it was one of the first suspension bridges and appears to defy gravity. Hannah steadfastly defends the bridge and longs to prove to her father and all the other skeptics that the marvelous bridge is sound. Fate takes a hand when P.T. Barnum, always the showman, leads his twenty-one elephants across the bridge. This captivating piece of historical fiction features an assertive young girl whose obsession with the bridge is based completely on the facts she has learned. Her determination is rewarded when she finally walks hand in hand with her father across “her” bridge. Pham’s illustrations evoke the time period beautifully and her renderings of Hannah are animated and full of life. 2004, Simon & Schuster, Ages 4 to 7.

K-Gr 2-From toddlerhood on, Hannah has watched the building of the Brooklyn Bridge and cannot wait to walk across it into Manhattan. Her father does not trust the structure and refuses to allow her to cross it. They attend the opening ceremony with President Chester A. Arthur, the mayor of New York, and Mrs. Emily Roebling (the chief engineer), but nothing will convince the man that the architectural marvel is safe. To cheer her up, her father takes her to the circus, where she shares an idea with P. T. Barnum. He shows her a flyer (that readers do not see) advertising a circus parade with the famous Jumbo in the lead. A few days later, 21 elephants cross the bridge and Hannah’s father is convinced that it is secure. While the realistically rendered watercolors give a reasonably accurate view of life during the period, Hannah seems to grow very little. It took about eight years to complete the project and the child never looks older than five or six. The author’s note indicates that P. T. Barnum actually did parade his elephants over the Brooklyn Bridge in 1884. This title would add a little something to a unit on transportation or New York City history, but it doesn’t capture the real excitement the bridge held for many people at that time.

Fact and fiction dovetail neatly in this tale of a wonderfully resolute child who finds a memorable way to convince her father that the newly-finished Brooklyn Bridge is safe to cross. Having watched the great bridge going up for most of her young life, Hannah is eager to walk it, but despite repeated, fact-laced appeals to reason (and Hannah is a positive fount of information about its materials and design), her father won’t be moved: “No little girl of mine will cross that metal monster!” Hannah finally hatches a far-fetched plan to convince him once and for all; can she persuade the renowned P.T. Barnum to march his corps of elephants across? She can, and does (actually, he was already planning to do it). Pham places Hannah, radiating sturdy confidence, within sepia-toned, exactly rendered period scenes that capture both the grandeur of the bridge in its various stages of construction, and the range of expressions on the faces of onlookers during its opening ceremonies and after. Readers will applaud Hannah’s polite persistence. (afterword, resources) (Picture book. 7-10)