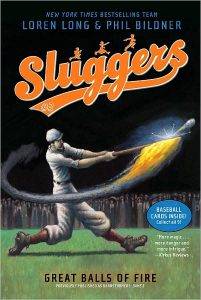 The year is 1899 and the Travelin’ Nine are barnstorming their way across the good ol’ U. S. of A., trying to raise money to pay off the Payne family’s big-league debt.

Pulling into Chicago, Griffith has a run-in with an enormous thug and is more convinced than ever that the nefarious robber baron called “The Chancellor” knows about their magic baseball.

Ruby also has an encounter with a mysterious stranger, and even though she doesn’t know why, she knows that he will change the Travelin’ Nine.

And Graham launches a towering shot out of the park when he thinks no one is looking. Unfortunately, the wrong eyes may have seen what the youngest Payne can do with a baseball.

Chicago is a hot town, so the Paynes better keep their cool. The Travelin’ Nine still have more money to make!

#1 New York Times bestseller Loren Long and Texas Bluebonnet winner Phil Bildner create a memorable modern-day parable where three siblings embark on the adventure of a lifetime and discover the strength in family, the power of faith, and the true magic of baseball.