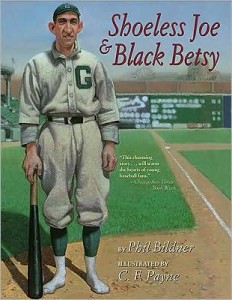 No one knew better than Shoeless Joe Jackson what was needed to become the best baseball player ever: a good bat. And no one knew more about bats than Ol’ Charlie Ferguson of South Carolina, a good friend of Joe’s. With love, nurture, and a lot of hard work, the two friends created Black Betsy — the finest bat in all the land. And with a bat the likes of her by his side, you can bet Joe went all the way to the major leagues!

Many baseball fans claim that Shoeless Joe Jackson was one of the greatest hitters to play the game. He earned his nickname when he participated in a game wearing socks, not shoes, on account of blisters. Why was he such a great hitter? Why, it was because of his bat, Black Betsy. Just before he was to play in the minors, Joe fell into a terrible hitting slump. He paid a visit to his friend, Ol’ Charlie Ferguson who agreed to make Joe a bat. Shoeless Joe named his bat after Betsy Ross so people would honor it just like they honor the flag. Ol’ Charlie needed to make several bats and gave Joe specific instructions on how to rub Betsy with tobacco juice for the dark and scary-looking color. When Shoeless Joe moved up to the majors, he batted .408. No other rookie has managed to beat his record. Incredible multi-media drawings that evoke the spirit of the era accompany a beautiful nostalgic story. An Afterword tells more of Joe’s life, his career, and of the Black Sox scandal of 1919 that banished him from the game he loved. 2002, Simon & Schuster Books for Young Readers/Simon & Schuster,

Is great hitting in the clean, natural swing of the batter-or the perfectly balanced feel of the bat? As kids know when they start playing baseball, small details must converge just right to overcome the edge between winning and losing, hitting and striking out. Sometimes this translates into superstitions or quirky behavior. First-time author Bildner toes this question in the quirks of Shoeless Joe Jackson and his feared bat, Black Betsy. Joe, who played in the major leagues from 1908 to 1920, does well in the minor leagues, but can’t seem to move up without the help of his South Carolina friend, the great bat-maker Charlie Ferguson. While Charlie knows how to make the best bat, it’s not hard to decide which needs tweaking more, the bat or Joe’s mind so he can finally realize his great potential. From Joe sleeping with the bat to his wrapping it in the cotton of his southern roots, Bildner sticks mostly to the main facts and resists a romanticization of the game. Players who know the perfect, sweeping amalgamation of hand, eye, and sweet spot might expect to hear its dramatic tenor when Joe cracks the ball with Black Betsy, but this is a story finished by statistics. Payne’s (Brave Harriet, p. 944, etc.) mixed-media illustrations are gorgeous: the fuzz is in the flannel and the light is just right. And so are his perspectives, angles, and other compositional choices that make for the right mix of mystery and narrative to draw the reader in. A lengthy synopsis of Joe’s entire career and his statistics are appended. (Picture book. 5-8)